Hyperopia or longsightedness is more difficult to understand.The longsighted individual can not see clearly near or far but distance is better. It is often confused with presbyopia, because people think that when their distance is good but they can’t read that that must be that they have become longsighted.

In a normal individual, an image of an object that is being looked at is focused onto the retina at the back of the eye.

However in hyperopia the image is focused not on the retina but behind it.

One trick that a long sighted person is able to employ, is that by accommodating, he can compensate for some of his hyperopia. For example, if the degree of longsightedness is say 2 diopters, then he can accommodate an equivalent amount and thus ‘mask’ the hyperopia. This is called ‘latent’ hyperopia. This amount of accommodation which is used to compensate for the hyperopia is thus not available for reading. Thus, the young hyperope may not even know that they are longsighted. However as they age and the ability to accommodate starts to decrease, there come a time when they don't have enough accommodation left and the hyperopia then becomes manifest. 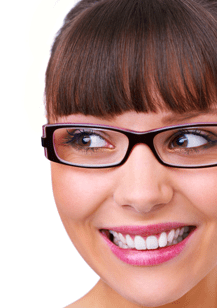 If the amount of hyperopia is greater the the accommodative ability, then the longsighted person won’t be able to 'accommodate' it out and glasses will be required. Similarly in the young hyperope, who is able to accommodate and thus 'hide' it, there comes a time when their accommodation runs out and again their hypeopia become manifest.

Asthenopia refers to the symptoms that the young hyperope complains of, mainly late in the day. The symptoms consist of fatigue or tired eyes. This is due to the fact that all day long their lens has been accommodating and therefore the muscles involved in accommodating are getting tired. This is relived by wearing corrective glasses or contact lenses.

Hyperopes have the most to gain after vision correction because their vision is never good. Their myopic cousins can at least see up close. Hyperopes can’t put on their makeup, can’t tell the shampoo bottle from the conditioner and can’t see their alarm clocks. The longsighted person after vision correction sees better not only in the distance but even their near vision is vastly better. However, just like everyone else, presbyopia still lurks after 45 and therefore need correction with either reading glasses or something else.

The longsighted person who presents for vision correction is harder to measure. This is because their lens is chronically accommodating and masks their true degree of hyperopia. Thus this group of people need more careful measurement and more time taken to determine their true refractive error.