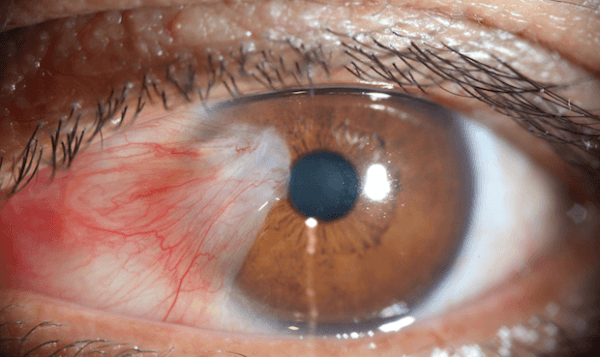 WHAT IS A PTERYGIUM ?

A pterygium is a fleshy degeneration of collagen and fibrovascular proliferation of the conjunctiva. It occurs most commonly on the nasal side and its hallmark feature is growth over the cornea surface.

Its pathophysiology is characterized by migration of conjunctival and limbal like cells into the corneal epithelium and invasion of the basement membrane of the normal cornea with dissolution of Bowman’s layer.

A pterygium has different parts which include a head a body and a tail. Often there is abnormal epithelium at its leading
edge.

There is evidence that there is a genetic predisposition to developing pterygium so that if can run in families. Additionally, it is thought that exposure to UV light is a trigger for its growth. If there is a strong genetic predisposition, a pterygium can form even in individuals who do not have a lot of UV light exposure such as office workers. If on the other hand, the genetic trait is not strongly expressed, it may require considerable exposure to sunlight to cause pterygium such as evident in farmers or outdoor workers.

Pterygiums tend to slowly advance across the cornea and in the extreme can cover it. Mostly however, they grow slowly and not cause any problems.

INDICATIONS FOR ITS REMOVAL

There are three main indications for the removal of a pterygium. In order of importance they are:

A small pterygium can still cause irritation due to drying and chronic inflammation.

A good approach is to use frequent lubricants to keep the pterygium moist.

Occasional use of topical steroids such as Fluoromethalone (FML) can also help but is rarely required.

Pterygiums can be surgically removed.

Unfortunately however, removal alone is associated with an up to 50% recurrence rate. For this reason many adjuvant therapies have been tried to increase success rates.

These include, local radiotherapy, application of Mitomicing C, amniotic membrane grafts and autoconjunctival grafts. Of these, only autoconjunctival grafts has really been successful and is the current standard of care. The use of radiotherapy and Mitomicin C has been associated with severe complications, often years after their use. Mitomicin is still used occasionally , mainly in difficult or recurrent cases.

The operation is performed under local anaesthetic and takes about an hour. Essentially the ptergium is excised leaving a bare area which is then covered by a section of conjunctiva. The donor conjunctiva is taken from a non sun exposed area such as under the upper lid. The area from which the graft is taken re-grows and in fact can be re-used if a second graft is required.

The graft is sutured to close the bare area and heals in about 2-3 weeks. A pterygium procedure done well can restore the eye’s appearance back to normal. Professor Lawrence Hirst is a Brisbane ophthalmologist who has developed a technique which he calls P.E.R.F.E.C.T for pterygium . Whilst we are not trained by him , we have based our surgery on his technique.