Lasik vs PRK. What are the differences and which should I have?

Lasik vs PRK is a common question that I am often asked.

So what is the difference between Lasik and PRK and which should you  have?

This is an important question which is actually explained in details in other sections of this site but one that is worth summarising.

PRK stands for Photo Refractive Keratectomy and was one of the original corneal procedures for vision correction, first performed in Berlin in 1987.

In PRK, the epithelium of the cornea is removed by either alcohol or direct removal with a spatula. This of course is done with local anaesthetic. The epithelium is a layer of cells which is always reforming an is usually what is injured when someone inadvertently injures their eye, for example with a baby’s fingernail.

This exposes the stroma of the cornea  where the laser will perform the correction. The stroma is the main bulk of the cornea. The epithelium which is removed grows back very quickly much like skin grows back after an abrasion.

Once the epithelium is removed, the laser is applied to the cornea to change its shape to correct vision. This is a very rapid procedure taking only about 30 seconds.

Following the procedure, a contact lens is placed in each eye to reduce the discomfort and to allow the epithelium to grow back. The contact lens is usually removed after about 36 hours.

Following surgery it is common to experience light sensitivity and discomfort for two to three days. Vision is better within days but is not at its best for several weeks to several months.

Due to the discomfort and the delay in achieving perfect vision, PRK became less popular and ultimately, largely replaced by Lasik.

Lasik stands for Laser Assisted In situ Keratomileusis and this is what most people think of when they think about laser vision correction.

The flap heals and eventually becomes difficult to even see.

The main advantages of Lasik over PRK is that there is absolutely no pain or discomfort and that excellent vision is almost immediate. 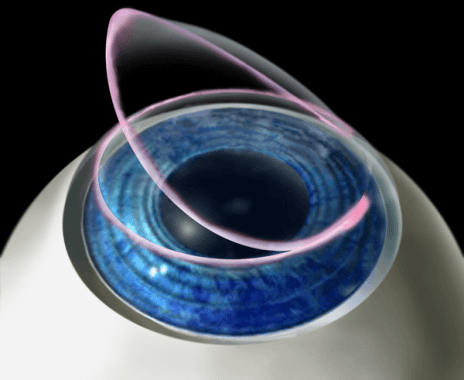 So given that PRK is more uncomfortable and takes longer for vision to be excellent, why would anyone even consider it?

The main reasons why one would recommended PRK over Lasik are if you have thin corneas, the required correction is small or if the corneal topography scan is not entirely normal.

Lasik flaps can (although) rarely develop problems such as epithelial ingrowth, folds (striae) or become dislodged. Therefore avoiding a flap in many ways is advantageous.

One cannot however get away from the fact that PRK has a slower recovery and is uncomfortable.

Long term there is no great difference in outcomes with both PRK and Lasik patients having similar visual outcomes.

At the end of the day, the decision as to which one to have will be decided by your eye surgeon based on which is most suitable.

If you have an adequately thick cornea with a normal scan then you will probably have Lasik.

If you have a thin cornea, a small correction or an unusual corneal scan then you will have PRK